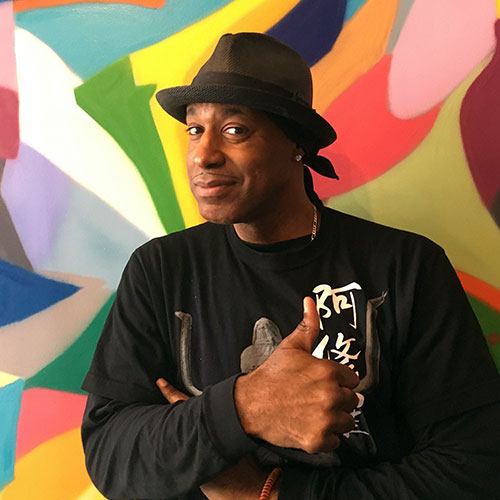 Torrence Griffin, also known as Tea-Buggz, has been dancing hip hop for 34 years. He is proficient in popping, waving, ticking, king tutting, dancing the styles of animation and mannequin.

He began dancing in 1981 on the South Side of Chicago with the original Electric Funkateers, which quickly became one of the premier pop-locking dance groups in the city. In his 34 years of dancing, he has worked with the likes of Genuine, Queen Latifah, Sinbad, Kurtis Blow, and many others which led to his travelling extensively throughout the U.S. other parts of the world.

In 1984, Torrence won the Chicago Hip Hop Pioneer Award which acknowledged all of his years of hard work and dedication in the Chicago hip hop scene.

As a teacher, for the past 30 years, Torrence has taught at Columbia College Chicago, the Chicago Public Schools, Latin Street Dance Studio, and Christ University Temple, in addition to teaching master classes at various dance studios throughout the city.

Recently, he restarted his dance group Electric Funkateers to help promote the younger generation of street dancers. He has been an influential popping teacher in Chicago and has seen many of his students go on to win win numerous battles in this city and elsewhere.

Torrence strengths as a teacher are his ability to break down complex movements into smaller, more digestible parts and he prioritizes giving individual attention in his fitness and street dance classes.